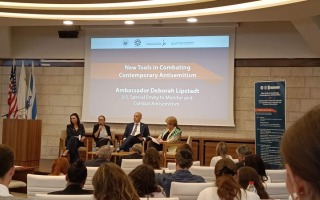 In collaboration with the United States Embassy in Jerusalem, HUJI hosted a special event this week to discuss Antisemitism in the Modern World. The event has been hosted by Ambassador Yossi Gal, Vice President of the Hebrew University of Jerusalem, with distinguished guests including U.S. Ambassador to Israel – Thomas R. Nides; Israel’s Minister of Diaspora Affairs – Nachman Shai; Ambassador Deborah Lipstadt, and Israel's Special Envoy for Combating Antisemitism and Delegitimization – Noa Tishby, who spoke  about Antisemitism in the Network.

Read More
From the TIMES OF ISRAEL by By YAAKOV SCHWARTZ

On the heels of a landmark trip to Saudi Arabia, the newly sworn-in United States special envoy to monitor and combat antisemitism, Prof. Deborah Lipstadt, said Tuesday at Jerusalem’s Hebrew University that “there is a change afoot in this region.”

She made her comments at the forum “New Tools in Combating Contemporary Antisemitism,” which was jointly held by the US Embassy in Jerusalem, Israel’s Foreign Ministry, the Hebrew University in Jerusalem and the Diaspora Ministry.

“For too many decades, the kingdom of Saudi Arabia was a great exporter of Jew-hatred, but what I found is something quite different, something that has changed there dramatically in the last few years,” Lipstadt said, noting that the kingdom has also begun to implement changes in religious laws and the position of women in the country.   “I met with the heads and staffs of embassies focused on combating violent extremism, focused on interfaith dialogue, including the Muslim World League, whose secretary-general visited Auschwitz in 2020,” Lipstadt said. “We heard from a number of people who seemed willing to divide between the geopolitical crisis as it stands here in Israel vis-à-vis the Palestinians and the fact that antisemitism is something separate and apart.

“These are important first steps. There was a clear willingness to continue this conversation. There is room to move things forward.”

Among the panelists at the forum were US Ambassador to Israel Thomas Nides, Israeli Diaspora Affairs Minister Nachman Shai, and CEO and national director of the Anti-Defamation League Jonathan Greenblatt. The forum was moderated by Hebrew University vice president and former Israeli ambassador Yossi Gal.

Lipstadt spoke about the qualities of antisemitism that set it apart from other forms of racism and prejudice. She cited antisemitism’s ubiquity, its appearance on both the right and the left, and the conspiracy theory that Jews are using their wealth and knowledge to control the world.

Speaking a day after a shooter killed six people and wounded dozens more at an Independence Day parade in the highly Jewish Chicago suburb of Highland Park, Lipstadt recalled the manifesto of the perpetrator of the May 14 massacre in Buffalo, New York, which specifically targeted Black people.

“He was very clear — he wanted to kill as many Black people as he could. Black people were a danger, they were a danger to white society,” Lipstadt said. “But he believed that behind the efforts to destroy white society were Jews. He described them as ‘demons, the biggest problem the Western world has ever had. They have to be killed, and if they are lucky, to be exiled. We cannot show them any sympathy, they have to go back to the hell from where they came.’”

The Foreign Ministry has said that it has received information about Jewish casualties in Monday’s mass shooting north of Chicago, one of whom was identified as a synagogue staffer.

The rabbi of a Chabad Hasidic congregation near the shooting in Chicago’s Highland Park neighborhood said the alleged shooter attempted to enter his synagogue during the Passover holiday several months ago but was told to leave.

At the forum in Jerusalem, Nides said, “None of us would disagree that antisemitism is on the rise. You can’t open a newspaper or look at social media and hear about the violence that takes place and not believe it to be true. We’re doing our best, but our best is not enough.”

Repeating Lipstadt’s statement that antisemitism seeps in from all corners of society and across the political spectrum, Greenblatt said, “Something has changed in the US and around the world. In 2021, the ADL recorded the highest number of antisemitic incidents we’ve ever seen in American history — 2,717 acts, a 34 percent increase over the prior year… The number last year was almost triple that of 2015.”

Greenblatt noted that over 100 white supremacists from a group called the Patriot Front marched on July 4 in front of the state house in Boston, Massachusetts, while just weeks before, an anonymous “mapping project” published details of Boston-area Jewish institutions, calling them part of the “Zionist empire of oppression.”

The website, run by self-described “activists,” said that “every network has an address, every address can be disrupted, every organization can be dismantled.”

“Who do they blame, who do they make this slander against? The Jewish Community Center of Boston, the Jewish day school, the synagogues. How does this happen that you blame the synagogues for the devastation and ‘colonization’? It’s because for years, we’ve seen this in some elements of the anti-Israel community. Anti-Israeli NGOs in the US have been saying this kind of thing for years, with no one stopping them, no one protesting them,” Greenblatt said.

He said the ADL is cooperating with the FBI to find out who is behind the project and to take the perpetrators to court for incitement and slander.

Lipstadt added that the mapping project “has brought something out from behind the scenes and made it very clear what is there.”

“It highlighted the problem in a way that 1,000 speeches and seminars could never do,” said Lipstadt. 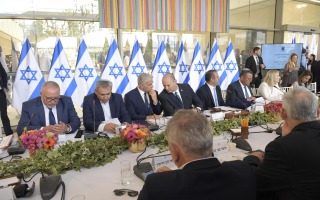 In honor of Jerusalem Day, a special session of Israel’s Knesset, headed by Prime Minister Naftali Bennett, was held at the Hebrew University (HU)’s Edmond and Lily Safra Center for Brain Sciences (ELSC) at the Edmond J. Safra Campus in Jerusalem.

HU President Professor Asher Cohen welcomed the parliamentarians, many of whom are Hebrew U. alumni and alumnae, and Moshe Lion, the Mayor of Jerusalem, noting, “Hebrew University rejoices with Israel’s Knesset ministers on this festive day.  I can think of no better setting than our Safra Center for Brain Sciences—a vanguard for scientific education both nationally and internationally.  This center paves the way to innovative discovery in brain research and will give birth to the next generation of world-renown researchers who will harness the power of artificial intelligence and shed even greater light on the inner workings of the human brain.  Our goal at university is to equip Israel’s future leaders with the tools they’ll need to take Israel into the next century.  We’ve been at it for nearly 100 years, together with promoting equality in Israeli society, strengthening the interface between academia and industry, and encouraging involvement in community life in the city of Jerusalem and in the State of Israel."