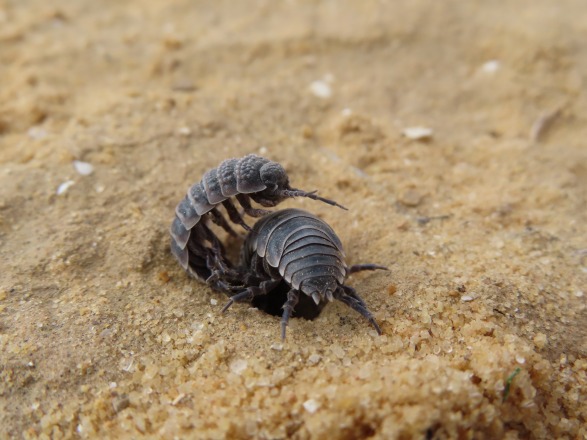 Desert isopods might not make top of the list of most-endearing animals, but these small (up to two centimeters-long) creatures, with their segmented bodies and seven pairs of legs, are actually fascinating animals and ideal to study when looking at mating preferences.

They mate only once in their lifetime and spend the rest of their yearlong life with their chosen mate and their family (of 60-70 offspring) in a single permanent burrow.  The isopod females initially dig the burrow and the males fight to win a particular female and a particular habitat.  Both parents take care of the brood, and all family members—young and old—continue to excavate and clean the burrow together.  Choosing where to establish a home is the responsibility of the female woodlouse (“desert isopod “) and under normal conditions, the largest males usually win the largest females.  However, what happens when there is a predator, such as an Israeli gold scorpion, living nearby?

A study of this scenario was carried out in the Negev Desert, in southern Israel, by a Hebrew University of Jerusalem (HU) research team led by Professor Dror Hawlena and Dr. Viraj Torsekar.  They observed the mating behavior of male desert isopods in two locations – one close to the burrow of an Israeli gold scorpion (a risky area), and one further away (a safe area).  Their findings, recently published in Ecology, demonstrated the preference of large males for larger females in safe areas but less so for large females in risky areas.  “Using this manipulative field experiment, we found that desert isopods under risk of scorpion predation maintained ‘size assortative mating’, but that males that chose and fought over females were on average smaller for a given female size,” Torsekar explained.  Additionally, while bigger males stayed longer near safe burrows and won more male-male contests, fewer pairs were formed in risky sites.

The researchers also showed that the smaller males had often accepted second best and moved in with smaller females close to the lurking scorpion. Medium sized males chose between smaller females in safe places and larger female in risky places - demonstrating an equal fitness choice.

"This supported our novel hypothesis that the males anticipated the future risk of predation," noted Torsekar. The males seemed to incorporate information on the proximity of a predator when choosing a mate. They no longer made their selection based solely on the size of the female, although larger females do have larger broods.

It is hard work for the females to dig into the dry compacted soil of the desert, so they are always on the lookout for holes that can make life a little easier. The HU researchers dug holes in two groups, one near the burrow of an Israeli gold scorpion and one further away.  Female isopods readily adopted the holes and excavated full-size burrows. However, the study showed that fewer isopod pairs took up residence in burrows near predators, despite it being virtually free real estate.

It should be noted that the predatory behavior of scorpions is localized to the immediate vicinity around their burrows.  They don't go wandering off to look for prey but emerge only to attack prey that is detected by the vibrations isopods cause as they walk across the burrow roof.  However, it is known that the odor of the scorpion does alert isopods when they are near to its lair.

In courtship, once the females adopt a burrow, they are ready to admit a male. Peeping out from the top of the burrow, male and female encounter each other face-to-face - probably using the separation between the eyes of their prospective mate to assess size. Males compete furiously over the larger females, in hopes of producing a large brood.

"This information is crucial in predicting how the fear of a predator may affect prey population dynamics and evolutionary processes in the creation of new species," concluded Torsekar.