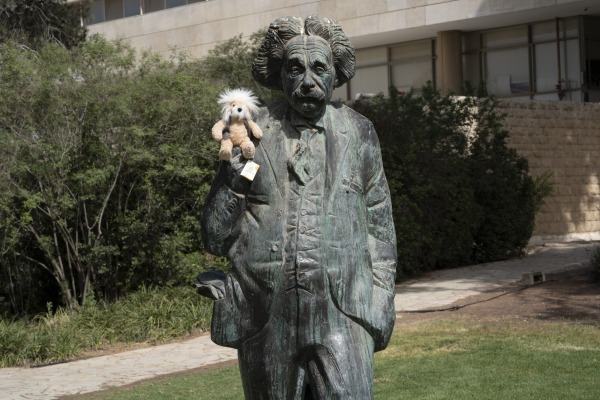 Today, Israel’s government approved the establishment of the Albert Einstein Museum at Safra Campus of the Hebrew University of Jerusalem, at the cost of $18 million USD / NIS 64 million.

This project, led by the Ministry of Jerusalem Affairs and Heritage and the Hebrew University of Jerusalem, includes the construction of a unique building on the university’s Safra Campus at Givat Ram that will house the full Einstein archives. The archives will be accessible to the general public in digital format and the museum will also serve as an innovative space for scientific and technological education.

The Albert Einstein Museum will showcase the research, activities, and legacy of Albert Einstein, a Nobel prizewinner and one of the world’s most renown scientists. With cutting-edge exhibition techniques, scientific demonstrations, and original documents, the Museum will present Einstein’s contributions to science, the impact of his discoveries on our lives today, his public activity and involvement in key historical moments during his lifetime.  Further, the Museum will highlight Einstein’s deep connection with the destiny of the Jewish people, the State of Israel, and the Hebrew University of Jerusalem, of which he was a founder.

Visitors will be able to tour a reconstruction of Einstein’s library and office, and to view several original papers of his.  The project directors expect the Albert Einstein Museum to become a major tourist attraction in Israel.

This initiative was made possible through funding by Israel’s Ministry of Jerusalem Affairs and Heritage, headed by MK Ze’ev Elkin, as well as the Ministry of Education, Culture and Sport, the Ministry of Finance, and the Prime Minister’s Office. The government will provide NIS 22.5 million and the University NIS 41.5 million.

MK Ze’ev Elkin, Minister of Construction and Housing, and of Jerusalem Affairs and Heritage: “Today, as the new academic year opens, we are passing an important resolution for strengthening academia in Israel, the capital of Israel, and the Hebrew University. The establishment of the Albert Einstein Museum and the provision of a permanent home for the full Einstein archives will bolster the standing of Israeli academia in general, and of the Hebrew University in particular, in the international arena; will reinforce the international status of Jerusalem as Israel’s capital; and will bring tens of thousands of tourists to this unique site. I would like to thank our partners in this unique project in the government and at the university, and as a Hebrew University graduate and former lecturer, I would like to wish every success to the hundreds of thousands of students who are beginning their academic studies today.”

Professor Asher Cohen, president of the Hebrew University of Jerusalem: “Albert Einstein was one of the most prominent supporters of the State of Israel and one of the founding fathers of Hebrew University. His legacy of excellence in academic research forms the very foundation of our university, whereas his scientific achievements, which changed the world of physics, continue to impact all of our lives, from lasers and nuclear energy to GPS and space travel. These developments, and many more, can be traced to Einstein’s Theory of Relativity. On behalf of the entire Hebrew University community, I would like to thank Minister Ze’ev Elkin and the government of Israel for helping to establish of this museum, which will preserve and cherish the legacy of the greatest scientist of our time.”